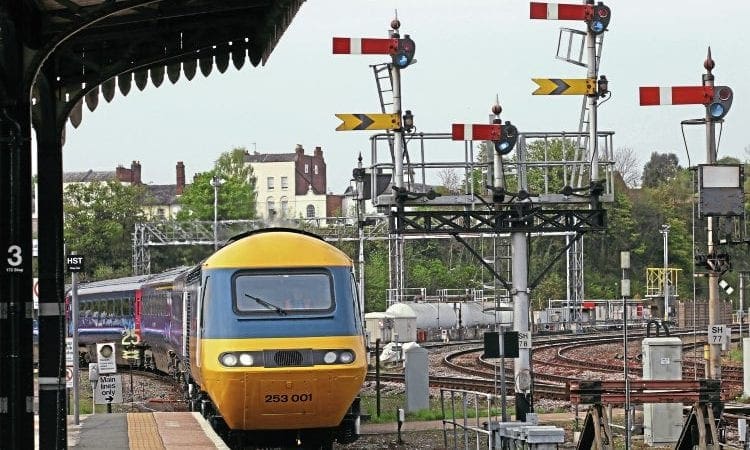 Running east to west through the heart of the country through rolling landscape is the Oxford to Hereford line.

Stephen Roberts takes a trip over a route which operates with a mix of single- and double-track, manual and electric signalling, and now a mix of old and new trains.

It was like coming home. My parents came from Herefordshire. I was born in Worcester and raised in Evesham. So research for this feature was like a trip down memory lane.

Even when I moved away I often arrived at Brunel’s great train shed at Paddington,
duty-bound to catch a ‘Cotswold Line’ train, a route which today has the Cotswold Line Promotion Group (CLPG) fighting for it.

The railway first came to Oxford in 1844, a short stretch of line, about 9¾ miles, connecting it to Didcot, courtesy of the Oxford Railway Company. This line exemplified how the GWR grew like the Hydra, a separate company being set up, but using capital provided by the Great Western. ‘Big Brother’ formally acquired the little tiddler the same year, and also in the same year (1844), the Oxford, Worcester & Wolverhampton (OWW) was formed.

However, the story really begins in 1851 with the opening of this railway, a line crossing a fair old chunk of England, beginning in Wolverhampton, north-west of Birmingham, then running south through firstly industrial areas, then farming territory, as it attained Stourbridge, Kidderminster, Worcester, Evesham, and finally Oxford (the first train between Oxford and Evesham running in June 1853).

It was known colloquially as the ‘Old Worse and Worse’ (OWW) and the company did its level-best to merit the moniker by turning a blind-eye to some of the sloppiest working practices imaginable.

That railway had been promoted by mining and manufacturing concerns in south Staffordshire, and is perhaps the first surprise in this story.

The route is predominantly rural today, yet it was industry giving it early impetus. The OWW was not without its birth-pangs either.

There was a right-royal spat between it and the GWR.

The line was engineered by Brunel, and his GWR committed itself to financial support, but a row developed over how far this went, whether they were to contribute a percentage of all construction costs, or if a cap needed to be applied.