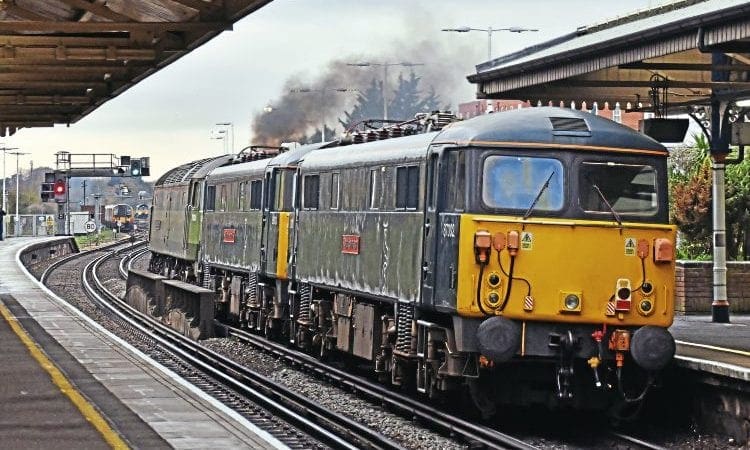 The last mainline Class 87 – No. 87002 Royal Sovereign – along with 86101 Sir William A Stanier FRS had been hired by ETL to GB Railfreight for working empty stock from the Caledonian Sleeper between London Euston and Wembley depot as well as from Glasgow Central to Polmadie, but the introduction of the Mk5 sleeping carriages on the ‘Highlander’ operation has left both locos, as well as backup loco No. 86401, with no future work.

ETL had looked for alternative work with other operators, but this didn’t materialise, and so the company decided to sell 86101 and 87002.

Initially, the pair were moved to Crewe and stabled behind platform 12 near the LSL depot, but on November 19, No. 86101 hauled its stablemate plus Class 47 No. 47810 from Crewe to Wembley, before the Class 47 ran round to haul the two dead electric locos to Arlington Fleet Services at Eastleigh via Reading and Basingstoke.

At Eastleigh, the pair will be repainted, but which livery is not currently known.

ETL says the future of No. 86401 is under review. However, the sale of its other two mainline locos will allow ETL to re-focus its resources away from mainline operations on to its fleet of locomotives at Barrow Hill.

LSL is continuing to grow its fleet as part of its Saphos and Statesman charter businesses, and with the acquisition of two 100mph electric locos, in addition to the two Class 90s, it has signalled the intention to buy one stood down by Greater Anglia, plus the HST set it will also acquire from Porterbrook.

The speed capability of the locos and HST will also provide for better train paths into and out of London on the West Coast Main Line.

■ LSL has also bought Class 60 No. 60081 Isambard Kingdom Brunel, which is intended for cosmetic overhaul and display at its Margate storage facility. The GWR green loco was withdrawn in April 2005 after a catastrophic engine failure.