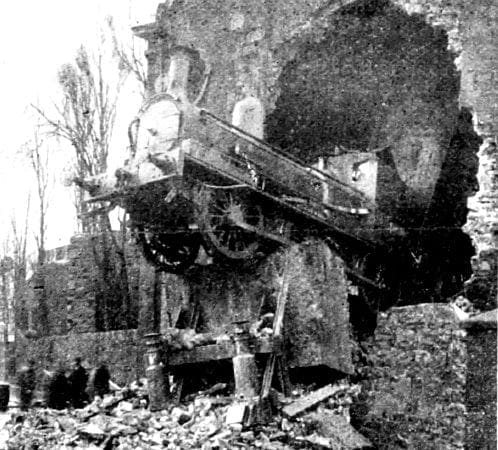 A curious railway accident, as reported in The Railway Magazine, March 1900...

As will be seen by our illustration, a curious railway accident occurred at terminus of the Dublin, Wicklow, and Wexford Railway about half-past four on the after the noon of Wednesday, February 14, 1900.

A cattle train failed to stop at the station, and the engine dashed through the station wall, and hung suspended in mid-air over Hatch Street.

The accident is unparalleled in Ireland, though one similar in its nature occurred at a Paris railway station some time ago, and attracted widespread attention. Fortunately, the accident at Harcourt Street was unattended by loss of life, though the engine-driver was severely injured.

The cattle train left Enniscorthy about 10 o’c1ock in the morning, picking up trucks filled with cattle for the Dublin market at the different stations. A great many of the cattle were from Arklow Fair, to be sold at Dublin on February 15th. When the last truck was taken up, the train was a heavy one, consisting of about thirty trucks.

All went well until the train was approaching Harcourt Street Station, when the driver found he could not get his brakes to hold the train, owing to the slippery nature of the rails.

Also from the archive:

The heavy train overpowered the engine, which dashed through the station, to the great alarm of the people on the platform, who saw that an accident of a serious nature must result. The engine, dashing against the stationary buffers at the end of the platform, drove them from their place, and, with a terrific crash, bored right through the wall itself.

The locomotive was seen, amid a shower of falling masonry, to push on through the aperture, and come to a stop, suspended in mid-air, 30 feet over Hatch Street. Our illustration shows the 6-coupled goods engine thus suspended, with the tender in end behind it, and the massive stop-blocks in the street below.

The fireman jumped off the engine and was unhurt, but the driver was badly injured, being thrown from the engine when it struck the wall. ‘ His right arm was jammed tightly between some broken bars and the tender, and he lay pinned just over the broken wall.

When extracted it was found that his right hand was almost severed from his arm. The driver was removed to the hospital, where the arm was amputated just below the shoulder.

None of the cattle-men who were in the train had been injured. The guard also escaped. There was intense excitement in the station when the accident occurred. The engine, on striking the buffers, had wrenched the dead end of solid masonry from its place, and, mounting the bank, had crashed through the wall, displacing nearly a thousand cubic feet of masonry.

A breakdown gang was soon at work; the fire drawn from the fire-box, and the steam allowed to escape. The cattle wagons were speedily detached, and drawn off by another engine, and, when this was accomplished, the odinary traffic in the station was reumed.

The breakdown gang worked all night removing the engine and clearing away the debris.