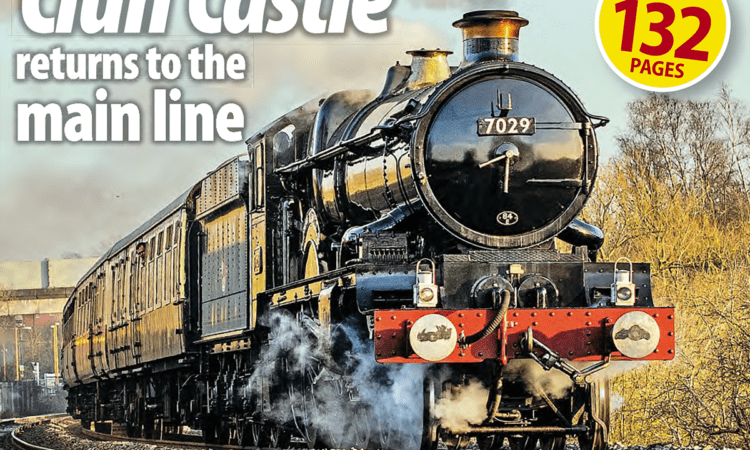 This month’s issue of The RM is packed with some great features, the latest news and some fantastic photographs of both heritage and the main line railway.

If you’d like to read this edition of The RM, then you can cut to the chase and download the digital version, order the print magazine, or better yet save those pennies and subscribe to The Railway Magazine.

Here’s what you will find in the March issue:

CLUN CASTLE BACK ON THE MAIN LINE |After a 25-year absence, No. 7029 Clun Castle returns to the main line as the new flagship engine for Vintage Trains

RAIL REVIVAL FOR CONNEMARA |Plans to develop a railway preservation scheme at Connemara, in the west of Ireland, are exclusively previewed

COTSWOLD LINE IN FOCUS |The scenic railway across the heart of England is put under the microscope.

PLUS a free 32-page A5 supplement with 101 unusual facts about railways you may not have known.

The Railway Magazine is on sale in UK newsagents and supermarkets, and you can buy the current issue in digital and paper formats here!

You can also buy stacks of back issues of The RM but it’s cheaper to subscribe. Subscribers save money, get their copies delivered to their doorstep and never miss an issue!

EDITOR INTRO |Can this rail fare mess ever be resolved?

Proposals by the Rail Delivery Group (RDG) to embark on a ‘once-in-a-generation reform’ to an archaic and over complex ticketing system are welcome and very much overdue. (See p6).

The plans from RDG are part of its contribution to the Williams Rail Review.

More than 20 years after the first franchise was awarded, and despite many previous promises by successive Governments to revise a structure with 55 million fare combinations covering 2,560 stations,  nothing has been done. It is still a confused – and confusing – mess.

A cursory check of fares between Edinburgh and Newcastle revealed 19 differently priced options, which is utterly ridiculous.

Readers may recall a proposal three years ago for a trial of single-leg pricing on selected routes, partly to combat split ticketing, but also to offer a realistic price for a journey.

You won’t be surprised to hear it was quietly dropped, because it would have involved some level of fare abstraction for the train operators involved, plus, I suspect, there was a lack of financial assistance from Department for Transport (DfT).

Under the present structure, one franchise needs approval from other franchises which may have an interest in the ‘passenger flow’ – no matter how small that interest is – before they can make changes. Above all, the DfT still has the controlling hand.

With the latest proposal, train operators insist fare changes must be ‘revenue neutral’, so some ticket prices will fall, others will rise in order to maintain the balance, with the end result aimed at not undermining the financial predictions on which the current franchises were won.

In short, there will be some winners, some losers, but I can’t help thinking it will end up being another fudged opportunity where passengers still don’t get a good deal.

Part of the RDG’s proposals is the ‘unbundling’ of fares to create a single fare as the basic unit of all pricing under the new system. However, the RDG says train companies will be able to create ‘discounted, premium, train-specific and personalised variations’ of these fares.

Isn’t that how we got into this mess in the first place?

VOLUNTEERS are the lifeblood of heritage railway movement.

However, the future of this key part of the tourism and leisure sector is at increasing risk.

The challenge facing heritage railways is not one of money (though that is vital) – it is a shortage of regular volunteers.

Quite rightly, visitors expect staff to greet and assist them, sell tickets, souvenirs or refreshments, answer questions, crew the trains or work in some of the unsung roles learning locomotive, carriage or wagon restoration and conservation.

Many volunteers have been working at a railway or attraction for a long time – such as the Talyllyn’s John Bate who, after 68 years volunteering, still passes on his knowledge and expertise to younger volunteers.

One of the problems is the age profile of many volunteers is upwards of 40 – and that’s not meant in a derogatory way.

Speaking at the Heritage Railway Association (HRA) dinner and awards, Peter Waterman OBE,
called the future for the heritage industry ‘worrying’, adding young people have a far greater range of distractions than volunteers did 20, 30 or 40 years ago.

With online gaming, social media pressures, long working hours, lengthy commutes, a pressure to keep fit, other hobbies and interests, or the lure of travel, it’s no surprise heritage organisations are finding it tough to attract new recruits.

Each railway appears to have its own volunteer programme, fine-tuned for specific age ranges, but are they sharing best practice with other railways? Should there be courses which lead to NVQs, which would open the door to a rewarding career with one of the train operating companies?

While the HRA is now recognising the important work of young volunteers with an annual award – and indeed The RM is highlighting the work of young apprentices at the Severn Valley Railway – if you have a family member who you think would benefit from working at a heritage railway, contact them and speak to their volunteer liaison officer as a first step.

Maybe you’ve recently retired, have time on your hands and are looking to fill a few hours.

Make that call to a railway which interests you –
it could be one of most rewarding calls you ever make.