NOW firmly ensconced as one of the Great Railway Journeys of the World – doubtless enhanced by the popularity of Harry Potter – the operation of scheduled steam trains over the West Highland Line from Glasgow to Fort William and on to Mallaig is an established part of Scottish tourism and a must for many tourists.

With BR reintroducing steam in 1984, and the operation by the West Coast Railway Company post-Privatisation, under the well publicised title of the ‘Jacobite’, the steam service runs most months from

Easter to Christmas, providing wonderful opportunities for photographing the line in all seasons – and all weathers!

Co-author John Hunt is well known as a footplate crew member at the North Yorkshire Moors Railway and also on the ‘Jacobite’ service, as both driver and fireman. 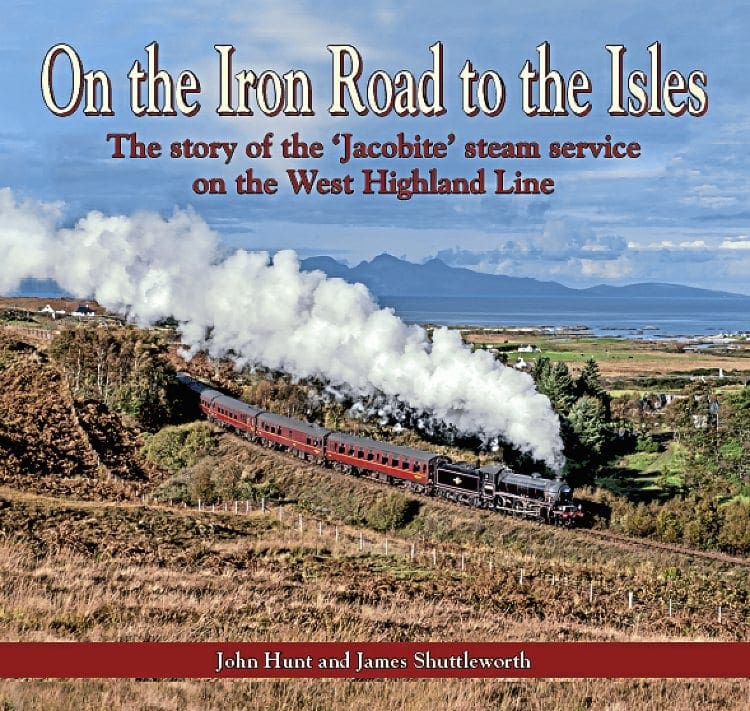 James Shuttleworth first sampled a run over the line to mark its centenary to Fort William in 1994, the following year returning as project manager (as well as undertaking many other tasks in the intervening years) for the newly relaunched ‘Jacobite’ service, as part of the West Coast Railways operation.

Both, therefore, are well placed to pen this pictorial tribute to a majestic railway.

With some useful historical background on the construction of the line, which opened to Mallaig in 1901, pictures of the ‘50s and ‘60s era remind us of the classes which worked the line, as well as some unusual specials, before the introduction of diesels in the 1960s.

Some modern images show the use of the line by passenger and freight today.

Beginning at Glasgow Queen Street, the reader is taken on a marvellous pictorial journey on the first 123 miles to Fort William, showing the route in its glory at some well-known and unusual locations.

Lochs, viaducts, mountains and forest, it’s all there in colour, showing the beauty and isolation of Corrour and overall ruggedness of the West Highland landscape.

More than half the book is devoted to the main ‘Jacobite’ journey from Fort William to Mallaig – including one of the line’s focal points, the 21-arch Glenfinnan Viaduct – and shows the variety of locos, liveries and rolling stock that has worked the service in all manner of weathers.

A lot of the photography is pure art, some of it verging on the ‘Turner-esque’.

There’s a section on how the operation works under the RETB system, pictures of the 15 different locos that have worked the route, and most importantly, the crews who have worked the ‘Jacobite’ over the years, plus a few VIPs who have enjoyed the ride.

The book draws on the work of 35 photographers who have made regular sojourns to this scenic and beautiful railway, but have also made the effort to get away from the main road that parallels much of the line in order to produce some stunning pictures of trains in the landscape – and therefore show the line in a new context.

There’s an occasional typographical error, but the images are generally first class and have been done justice by the quality art paper used for the book.

It may be above the normal price level for picture books, but quality like this comes along infrequently, and it should be one for your Christmas list.

Read about more great Christmas gift ideas in the November issue of The RM – on sale now!