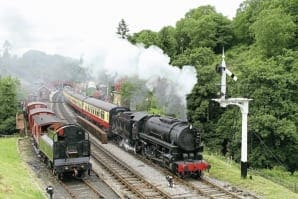 Goathland remains one of the NYMR’s busiest stations thanks largely to its connections to the Heartbeat TV series and Harry Potter movies. On August 6, 2013 visiting USATC ‘S160’ 2-8-0 No. 6046 departs with the 13.50 service to Pickering. JOHN STORER

Chris Price, the North Yorkshire Moors Railway’s new general manager, is now eight months into his role. Gary Boyd-Hope went to meet him to find out how he has settled in and find out more about his vision for this ‘top flight’ preserved line.

It’s probably not the greeting you would expect from the general manager of one of preservation’s greatest success stories, but Chris Price and I are old friends from our days on the Talyllyn Railway, and I’d frankly have been very surprised to receive anything more formal.

He’s called me a lot worse over the years!

I’d gone up to meet him in his Pickering office in mid-April to find out how he had settled in to his new position in charge of the North Yorkshire Moors Railway (NYMR).