GREAT Western Railway named a Class 800 IET after two of Wales’ sporting greats. Set No. 800009 saw one driving car named after Leeds United and Juventus footballer John Charles in a ceremony at Cardiff on March 7.

Also displayed is his nickname, Il Gigante Buono – The Gentle Giant. The 6ft 2in Charles made 38 appearances for Wales during a career spanning 25 years.

The name was unveiled by Charles’ widow Glenda. 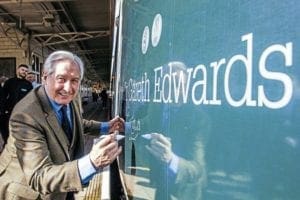 The other end of the set was named by Wales rugby union legend Gareth Edwards, who made 53 appearances for his country in an 11-year span, including winning the Five Nations Championship seven times. Edwards added a personal touch by signing the side of the unit.

Set number 9 was chosen as this was the shirt number of both players.
Pictures: JACK BOSKETT/GWR