THE Statfold Narrow Gauge Trust (SNGT) was inaugurated during a grand opening of the reconstructed museum building (The Roundhouse) at Statfold Barn Railway on March 10. 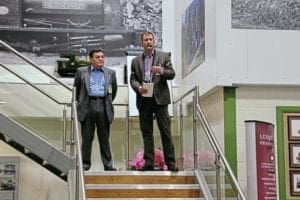 Full museum accreditation is being sought.

Alterations to the one-time grain store include adding a mezzanine floor, forming the Hunslet Gallery, displaying Hunslet 0-4-0STs King of the Scarlets, Michael and Gertrude, plus a Hunslet diesel.

The old Hunslet museum, next to the farm courtyard, has been closed and converted into a machine shop for the separate Statfold Engineering Ltd business.

A full catering facility has been added, together with a reception area, the latter in preparation for future general opening to the public, and developing the museum as an events facility. A shop will be opened in due course.

The railway is currently open on specified days each year to advance ticket holders only.