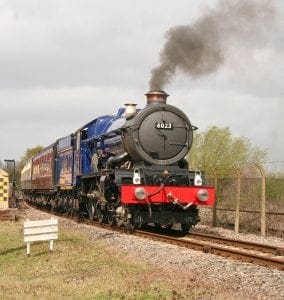 SINGLE-chimney ‘King’ No. 6023 ‘King Edward II’ will see its operation restricted to heritage lines for the foreseeable future after the Great Western Society put its main line aspirations on hold.
Since its return to steam in 2011 Didcot-based No. 6023 has yet to venture onto the main line under its own power. In 2013 it was fitted with its reduced-height boiler fittings, and has also received a new blastpipe and improved draughting arrangements, but the main line dream remained elusive; gauging restrictions preventing it venturing away from its home shed.
With around two years left on its boiler ticket, the GWS has carried out a review of the situation and regretfully decided to postpone its plans for main line operation.
A statement from the GWS said: “This was not an easy decision to make as lot of people have put in many hundreds, if not thousands of hours work on restoring the loco from its scrapyard condition as well as the considerable financial contribution made.”
The GWS cited several reasons for the decision, principally:

• A need to conclude the testing of the revised draughting.
• The limited time left on No. 6023’s boiler current certificate.
• The general turmoil within the steam charter train business at the present time.
• Route restrictions and limitations.
• Cost of loaded test runs.

“It has been decided that at the present time it would be unwise to proceed any further with our plans to operate No. 6023 on the main line and that it should be postponed,” the statement explained. “Our preferred option being to operate the loco on heritage railways and thereby gain valuable income towards a speedy boiler overhaul once her ticket has expired.
“Our aim would be to maintain her in full main line condition, with all the necessary annual safety checks, etc, so that should the situation change she could operate, once the necessary certification have been obtained, on the main line.”
It is now hoped that ‘King Edward II’ will move by road to the Severn Valley Railway during February for testing of the revised draughting. If the outcome is successful, the blue 4-6-0 will take part in the SVR’s March gala before moving to the Gloucestershire Warwickshire Steam Railway for its May gala, subject to agreement.