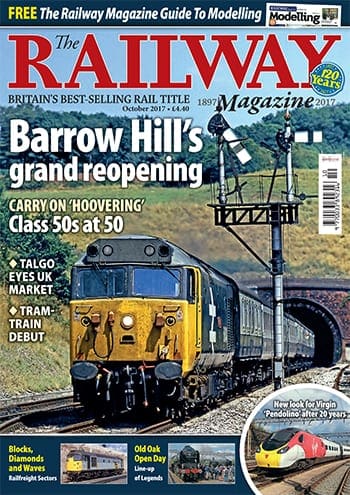 Former Virgin Rail PR manager Steven Knight reflects on the high-profile ups and downs of two decades of Virgin operations on the WCML.

John Heaton considers the merits of the Riddles ‘Austerity’ 2-8-0s built during the Second World War and later acquired by British Railways.

Building for the Future

Ben Jones visits Bridgnorth to see how the Severn Valley Railway is investing at the station to accommodate increasing visitor numbers.

The RM is backing the Railway Children charity’s campaign to protect vulnerable young people both in the UK and abroad – our October 7 railtour to Glasgow will raise money to support that campaign.

September 2 saw a final gathering of iconic Great Western Main Line trains at the West London depot before it is closed to make way for a new facility and High Speed 2 interchange.

In October 1987 BR relaunched its Railfreight business with a bold new image that remains one of the most popular and successful of the
pre-Privatisation period. Ben Jones looks back at how and why it was done.

Celebrating a half century of these cult English Electric Type 4s, Ben Jones considers their controversial introduction and the recent main line revival of the class.

November edition of The RM on sale on October 30