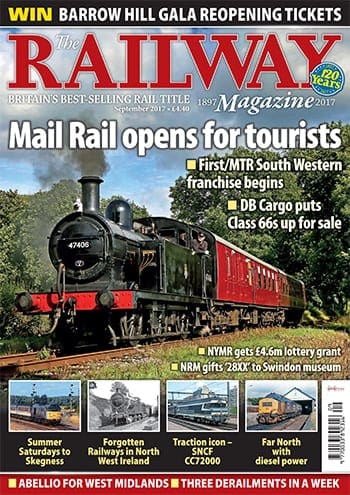 Heritage Diary
Details of when Britain’s unique collection of heritage railways and railway museums are open.

Summer Saturdays to Skegness
Pip Dunn recalls the summer holiday trains that took a wide variety of freight-only diesels from the East Midlands and Yorkshire to the Lincolnshire Coast between the 1970s and the early-1990s.

The demise of the railways in North-West Ireland
This month marks the 60th anniversary of the closure of more than 200 miles of lines in the north-west corner of Ireland. Neil Sprinks looks back and finds out why the region’s railways were decimated almost overnight.

Battling for The Far North
Keith Farr returns to the Far North Line to review the performance of diesel locomotives and DMUs over the difficult road to Wick and Thurso, looking at the Sulzer Type 2s of the 1960s and 1970s, the ‘37s’ of the 1980s, and the current ScotRail Class 158s.

A Dales Delight
The Embsay & Bolton Abbey Railway has gone from strength-to-strength since it reopened part of the Skipton to Ilkley line to tourists in 1981. Mark Smithers visits the Yorkshire Dales to discover the railway now has its sights set on reaching Skipton.

Last of the Giants: SNCF CC72000
Late August saw the last booked workings of the most powerful diesel locomotives in France – the SNCF CC72000s. Ben Jones takes a brief look at the reasons behind their development, where they worked, and their gradual decline over the last decade.

Mail Rail Opens to the Public
Keith Fender visits the new Postal Museum in London and rides on a revived section of the
Mail Rail system, which is now carrying passengers for the first time in its history.

COVER: Fowler ‘Jinty’ 0-6-0T No. 47406 heads a passenger train during a Timeline Events photo charter at the Ecclesbourne Valley Railway in Derbyshire on August 23. PETER ZABEK