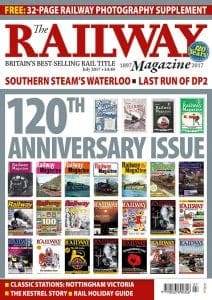 Heritage Diary
Details of when heritage railways and centres are open.

Meetings
Railway society meetings near you –  all the details.

The Big Bird That Flew Too Far
Fifty years after it was unveiled as the world’s most powerful single-engined diesel loco, Kestrel remains a source of fascination for British enthusiasts. Nick Pigott tells the story of the unique 4,000hp prototype in the first of a two-part series.

When Steam Met its Waterloo
The final months of steam operation on the Southern Region’s Western Division have become legendary for the high-speed exploits of grimy Bulleid Pacifics. Keith Farr recalls some outstanding performances from the BR steam era.

Nottingham Victoria
Nottingham’s cavernous GCR station waved farewell to its final trains in September 1967. Robin Stewart-Smith marks the anniversary with a two-part special, starting with a look at the station from its construction until the outbreak of the Second World War.

Presence of Mind
Fraser Pithie continues his look at serious rail accidents in 1967 with a tale of skill and bravery by railway crews faced with disaster on the East Coast Main Line – and the demise of English Electric prototype DP2.

Rail Holiday Guide 2017
The RM’s bi-annual guide to railway holidays in the UK and across the world. From depot visits to luxury land cruises there’s something to suit every interest and budget.