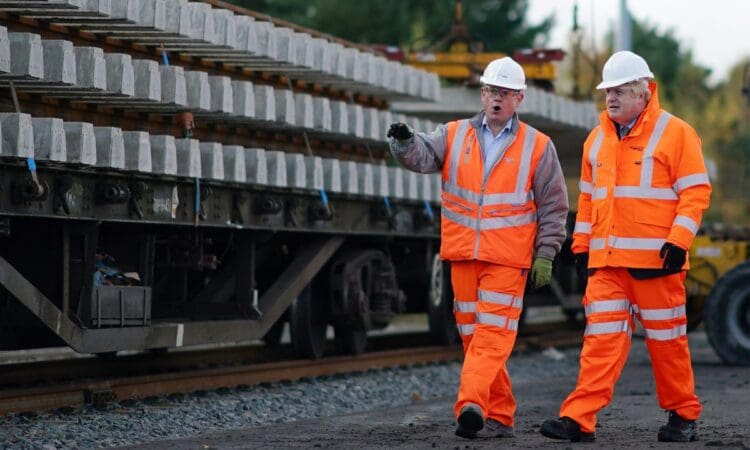 Boris Johnson said he has a “moral mission” to level up in the face of criticism of the Government’s decision to scale back rail upgrades.

Ministers announced last week that the eastern leg of HS2 between the Midlands and Leeds would be cut, while a promised Northern Powerhouse Rail link between Leeds and Manchester would run partly on existing tracks.

Tony Danker, director-general of the Confederation of British Industry (CBI), said the decision had “upset” businesses in the North of England, as he called for the Government to reconsider the move ahead of his organisation’s annual conference.

The Prime Minister, as well as facing backlash on rail, is looking to quell Conservative backbench frustration over his social care plans after it was revealed that the terms of the care cap means that some wealthy people could qualify for support faster than those who are poorer.

Labour shadow health secretary Jonathan Ashworth told Sky News that the social care reforms were “not levelling up” but instead amounted to “daylight robbery”.

But the Tory Party leader insisted that he remains committed to his landslide-winning election pledge to spread opportunity across the country.

He told the CBI conference in South Shields, in a speech where at one point he lost his place for almost 30 seconds, that his “levelling-up” agenda was a “moral mission” as well as a necessary move for the economy.

Mr Johnson, who argued that achieving his goal would help the UK become a bigger economy than Germany, said: “It’s a moral thing but it’s also an economic imperative.”

Rallying against the reaction in the press to his Government’s rail announcement, the Prime Minister said there would still be “massive gains” by a mixture of investing in new lines and upgrading existing track.

“I must say that I thought, as a lesson in what happens when you tell the British people we’re investing £96 billion in the biggest railway programme for 100 years, some of the coverage was missing the point, let me put it that way,” he told the conference.

“So, Birmingham to Newcastle is 40 minutes quicker under the IRP; from Newcastle to London will have 20 minutes shaved off because of the upgrades to the East Coast Mainline.

“You are mad as a railway enthusiast, which I am, to think that you always have to dig huge new trenches through virgin countryside and villages and housing estates in order to do high-speed rail.”

He added that Chancellor Rishi Sunak wanted to cut the tax burden for businesses but the Government had to be “prudent” following £407 billion of pandemic spending that had been “extremely tough for the taxpayer”.