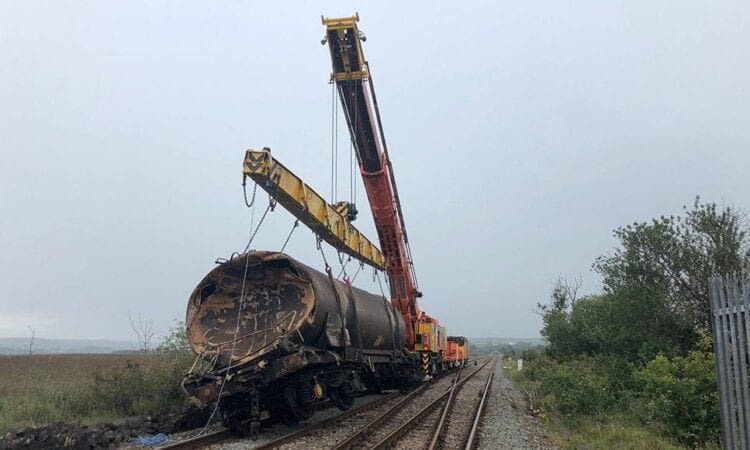 The Rail Accident Investigation Branch (RAIB) has released more details into its investigation into the derailment and fire involving a tanker train at Llangennech last month.

Network Rail revealed last week that the works at Llangennech are expected to continue throughout December ahead of a reopening in early 2021.

The RAIB investigation states: “At about 23:15 hrs on 26 August 2020, train 6A11, the 21:52 freight service from Robeston (Milford Haven) to Theale, conveying 25 tank wagons, each containing up to 75.5 tonnes of diesel or gas oil, derailed on the ‘Up District’ line near Llangennech, in Carmarthenshire.

“The derailment and the subsequent damage to the wagons resulted in a significant spillage of fuel and a major fire. The driver, who was unhurt, reported the accident to the signaller. Subsequent examination of the site revealed that a total of 10 wagons (positioned 3rd to 12th in the train) had derailed, and that around 330,000 litres of fuel had been spilt.

“The fire was tackled by the fire service, who ordered the evacuation of local residents due to concerns for their safety. Local people have reported seeing a plume of flames and smoke, and the strong smell of fuel.”

RAIB’s preliminary examination found that, although all the wheels of the train were probably rotating freely when the train left Robeston, at some point during the journey the brakes on all wheels of the third wagon of the train had become applied, and remained so until the derailment.

While three of the four axles of this wagon continued to turn, although their brakes were dragging, the leading axle ceased to rotate altogether, and consequently a flat spot around 230 mm long developed on each of the wheels on this axle. There was a substantial ‘false flange’ (a raised lip on the outer side of the wheel tread) associated with these flat spots.

When the train reached the crossover at Morlais Junction, travelling at about 30 mph (48 km/h), the false flange on the right-hand wheel caught on the converging stock rail and distorted the track, leading to derailment of both wheels. Around one hundred metres further on, the partly derailed wagon encountered facing points set to route the train to the right. The locomotive and the two leading wagons went to the right and the derailed third wagon went straight ahead. The third wagon turned over onto its right-hand side and became detached from the wagon in front of it. This caused the points and the track beyond them to be destroyed, and derailment of another nine wagons followed.

The train brakes came on when the brake pipes between the wagons parted in the derailment. The locomotive and the first two wagons came to a stop about 180 metres away from the third wagon.

The train driver looked back and saw that a fire had started in the wreckage. He uncoupled the locomotive from the first wagon and drove it around 400 metres away from the train.

RAIB says their investigation will identify the sequence of events and consider why the brakes on the third wagon became and remained applied, whether other factors contributed, how the derailment led to fuel spillage and fire, the maintenance of the third wagon and other underlying factors.