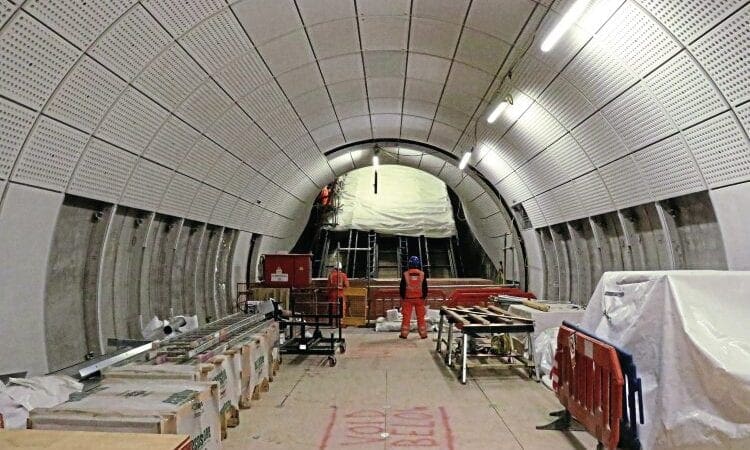 Keith Fender has been given an exclusive tour of Farringdon, one of the major interchange points on the £16billion project.

On December 9 the tunnel section of the Elizabeth Line under Central London will open to passengers, with services between Paddington and Abbey Wood via Canary Wharf running 15 times an hour in each direction. As this issue closed for press, there were 28 days before dynamic testing will begin, fewer than 300 days before the first public trains begin operation.

The first thing anyone entering the work site opposite Smithfield Market sees is a digital countdown to live testing of Class 345 trains through the station. Everyone who works there, and visitors, can’t help but notice this as it’s deliberately placed to be noticed.

Visiting the station site on November 24, 2017 there were 92 and a half days left before this was planned to start on February 24. Arriving on the almost finished platforms, it was apparent the station had yet to receive overhead electrification; the section from Farringdon to Liverpool St was due to receive the aluminium overhead conductor rail during January.

Construction work began in the Farringdon area in 2011 when the BAM Ferrovial Kier (BFK) consortium of civil engineering contractors responsible for the site started the first preparatory underground piling – this was done before the tunnel boring machines (TBMs) digging the tunnels under London were anywhere near Farringdon.

In 2012, three shafts to the future running tunnel level were dug and from these, parts of the new station site were excavated before the TBMs arrived.

The first two TBMs arrived at the site from Paddington in October 2013 and January 2014, while the other two arrived from the east in May 2015, having started at the Limmo Peninsula at Canning Town: TBM Elizabeth arrived at Farringdon on May 9, 2015 and sister machine Victoria successfully broke into the Farringdon station site on May 23 at 05.30 in the morning, and in the process completed all the tunnelling work on the Crossrail project.

From February 2016 onwards the project became known by its future name – the Elizabeth Line. The TBMs were partly dismantled at Farringdon, with many parts, including the cutter heads recovered for re-use or recycling. T

he steel ‘cans’ forming the outer front part of the machines were all left underground in Farringdon, buried out of sight in specially built chambers next to the running tunnels in the stations.

The station site was excavated (both from the access shafts), and once they were in place from the new running tunnels the concrete rings produced by the TBM had to be partly removed to enable access to the platforms.

One of the future access shafts was dug uphill from the station site to the surface. The new connecting passageways were built using sprayed concrete to preserve tunnels excavated by hand, using power tools. Those for public use have now been lined with tiles specially developed for the project; those in use for things such as ventilation shafts will remain in rough concrete.

At the busiest time when the main excavation work was going on there were up to 750 people working at the site at any time with three shifts working around the clock.

Fitting out the station

Work to fit out the station with platforms, safety systems and track started in January 2016, with around 500 people working on site round the clock.

The station platforms to be used by passengers are 250 metres long, although they extend behind false walls at both ends. Passageways leading to escalators and lifts to the surface are provided at both ends of the platform.

Out of sight, at both ends of the platforms, are the emergency stairways for evacuation and to allow access for firefighters.

Until the station is finished these stairways are the main access route for workers and visitors to the platforms, although there is a goods lift as well.

The new Crossrail route passes under the Barbican Centre, one of London’s premiere concert venues.

Very early on in the planning for the new line it was recognised special measures would be needed to ensure the new railway did not create noise or vibration which would disturb performances at the concert centre.

The solution is 1.34km of floating slab track – a concrete slab supported on heavy duty springs – which were cast in place using special liquid Magnadense concrete pumped underground via a special shaft created from the track bed of the old ‘widened lines’ on the Farringdon to Moorgate line at Hayne Street.

Magnadense concrete was used as it is more than twice as dense as normal concrete because of the inclusion of Magnetite iron ore mined in Sweden, meaning it will more effectively minimise noise and vibration caused by trains.

Because the tunnels are used by diesel-operated works trains bringing in materials and taking away waste, additional ventilation systems have been provided just for the construction phase.

For the Farringdon site much of the equipment lies above the station in the track bed and tunnels of the former ‘widened-lines’ section from Farringdon to Moorgate.

This will all be removed by summer 2018, although smaller purpose-built ventilation systems have been constructed in the new stations

The BFK consortium is using wi-fi technology to manage safety in the complex underground construction site.

The Farringdon site has used RFID (radio-frequency identification) tags, carried by every person underground, which via a wi-fi system that covers the entire site, enables those in charge of safety to know how many people are on site underground, and crucially, in an emergency, where there are.

The public entrances at Farringdon will use the new ticket hall across Cowcross Street, opposite the old Metropolitan Railway station, used by London Underground passengers. It opened in December 2011.

There will also be access directly from the northbound Thameslink platform, which will provide quick-level access to the main escalators down to the Elizabeth Line platforms.

From the southbound Thameslink platform it will be possible to directly access the Elizabeth Line using the lifts.

Another entrance, east of Smithfield Market, nearer Barbican Underground station, will also be provided, although this will only give access to the Elizabeth Line platforms.

At both entrances two banks of escalators, rather than one long one, are used to move passengers from ground level to platform level.

An inclined lift is being provided at the Barbican entrance because of space constraints.

When the full Elizabeth Line service (24 trains per hour east to Shenfield/Abbey Wood and west to Reading/Heathrow) opens in December 2019 it will be possible to make a huge range of currently complex journeys (eg: Stevenage to Canary Wharf, Luton to Maidenhead or Woolwich to Heathrow) with a single change from Thameslink to Elizabeth Line at Farringdon.

The new and expanded station is set to become one of the busiest in the country within a few years.

Hand over in June

By November 2017 the platforms were being finished with tiling, and the walls were covered in the white panels that will be used at all the Elizabeth Line underground stations.

The platform-edge doors that will feature at all the underground stations were beginning to take shape, and BFK project managers were confident the station will be ready to be handed over to operator MTR for pre-service testing and station staff training as scheduled on June 5.

Once the new station has been handed over by the contractors all the equipment currently in the former railway tunnels of the Farringdon to Moorgate line will be removed.

London Underground intends to rebuild a railway to Moorgate using the track bed, although this is designed as a secure central London stabling siding not for passenger use.

Much of the junction just east of Farringdon tube station has already been built. ■