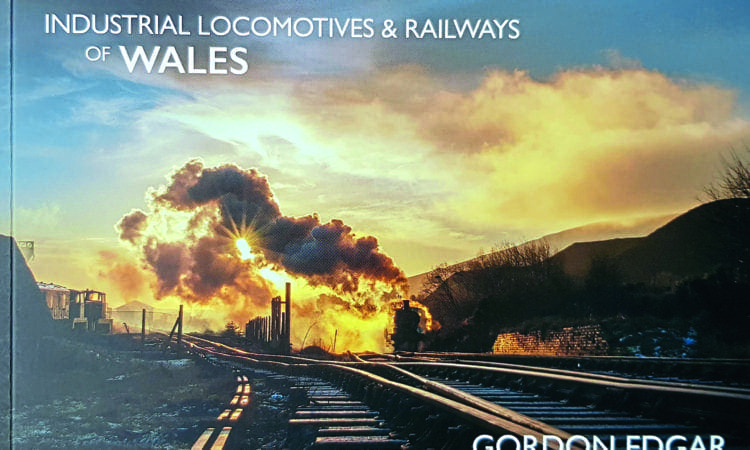 THE ‘Industrial Locomotives & Railways of…’ series by Gordon Edgar has made fascinating reading, but this latest volume covering Wales may arguably be the best yet.

For this book covers the many industries that made Wales famous the world over – namely steel, slate and coal.

After a short introduction the book turns immediately to the North Wales slate industry, featuring both colour and black & white images of the extensive Dinorwic and Penrhyn narrow gauge systems.

Shots from Pen-yr-Orsedd, Manod and Maenofferen quarries are also included, together with a handful of scenes from non-slate quarry railways, including William Wild & Sons at Holyhead.

A chapter covering the Steel & Smelting industries looks at the myriad diesel locos employed at the likes of Brymbo, Port Talbot and Margam steelworks, while steam also gets a look in – notably the delightful cut-down Andrew Barclay 0-4-0STs employed by the Llanelly Steel Company.

However, the largest section of the book is given over to coal, where aesthetically decrepit six-coupled saddle tanks hauling equally hard-worked 16T wagons form the subject matter of many evocative images.

Several locomotives well-known to preservation are included in this section, especially those from Mountain Ash, but there are also several images of locos that slipped through the net.

The same can be said of the 1882-built ex-GWR pannier No. 1923, which features in a later chapter looking at locos that made the transition from main line to industry.

This book really does have broad appeal, and thanks it its great reproduction and reasonable price makes it a welcome addition to any bookshelf. Recommended.

THE railways of the Republic of Ireland hold a unique appeal, and this was never truer than in the years prior to 2005 when the network was run on a shoestring and the infrastructure was still firmly rooted in the steam age.

This book is a pictorial study of the final years of the pre-modernisation era of the Irish Rail network, when Metrovick Bo-Bo and Co-Co diesels were still found across the country, and the now ubiquitous 22000 Class Railcars had yet to replace loco haulage on most passenger trains.

The selection of images is superb as it captures a railway in the very recent past, but feels like a lifetime ago.

Ammonia trains working past Bray Head to Shelton Abbey, Tara Mines zinc trains bound for Arklow, and the once common bulk cement and beet trains are all featured, often hauled by the
single-cab 121 Class in multiple, the later 141 class, or combinations thereof.

For many enthusiasts of Irish railway, this age of ‘Orange & Black’ holds the same nostalgic allure as the British Rail ‘Blue & Grey’ era, and nostalgia is something this book is brimming with.

However, Northern Ireland Railways are not forgotten, with 80 class units and NIR’s blue-liveried Metrovicks and Hunslet 101 class all featured.

This reviewer found something fascinating in almost every image, each of which is well reproduced and accompanied by a detailed caption.

With four photos per spread (180 in total) and each one in full colour, this snapshot of a railway now lost is thoroughly recommended.

Rebirth of a Classic
Steam Locomotive

By L A Summers

IT WAS a long time coming, but the completion of the Great Western Society’s (GWS) re-created Churchward ‘Saint’ No. 2999 Lady of Legend earlier this year must surely rank as one of modern preservation’s finest achievements.

This book by Les Summers tells the full story of how the GWS took the remains of Collett ‘Hall’ No. 4942 Maindy Hall, and used them to fill one of preservation’s most notable gaps by building a ‘Saint’.

It opens with a foreword by Lord Faulkner of Worcester, then after an introduction delves into the early work of G J Churchward, his influences and experiments, the birth of the ‘Saints’ and the legacy they left behind, both in the UK and on railways overseas – notably the New South Wales Government Railways ‘NN’ class.

The second chapter focuses on the performance of the ‘Saints’, while chapter three explains how preservation lost out on securing No. 2920 Saint David, and how a GWS member, the late Peter Rich, spearheaded a replica project that would ultimately not succeed, but would later be instrumental in the successful project that followed.

The author then turns his attention to No. 2999 – explaining how ‘mission impossible’ projects like the restoration of No. 71000 Duke of Gloucester and 6023 King Edward II paved the way for the
re-creation of a ‘Saint’.

The book follows the project through each stage of the construction, from the modification of No. 4942’s frames and the casting of new cylinders, to the production of the three coupled-wheelsets, the rebuild of the boiler and tender, and the ultimate first steaming.

As each stage is covered, the author explains the decision-making process, thus providing an intriguing insight into how such projects work.

It makes fascinating reading, and is well illustrated throughout.

An ideal read for anyone of a Swindon persuasion, or with an interest in steam locomotive engineering. GBH

THIS DVD is a real treat – focusing on nine of the purely steam-worked industrial ironstone lines of the East Midlands between Oxfordshire in the west and Lincolnshire in the east.

The original content has been excellently remastered from the original 1988 one-inch VHS masters.

Ivo Peters recorded these lines on 16mm colour film between 1961 and 1969 – thus preserving a key railway activity that was very soon to vanish completely in the UK.

It was also an aspect of railway operation that received relatively little attention from the majority of railway enthusiasts at the time.

These are certainly some of the least-known yet charming and fascinating lines in the country, and provide a wide variety of steam motive power.

The railways range from the narrow-gauge operations at Kettering to the complete standard-gauge lines of the Wroxton Oxfordshire system.

There is an excellent informative commentary which really enhances the appeal of the programme.

All in all strongly recommended to anyone with in an interest in UK industrial railways. RSS

FEATURING the operations of Peterborough PSB the DVD was filmed throughout 2017 and 2018.

Footage begins at the southern end of the PSBs control at Sandy Station, to its northern extent at Stoke Summit, and views within Peterborough PSB show the operation of the NX panel.

There are also views of staff working fringing signalboxes, along routes that connect to the ECML in the area, and sequences inside crossing boxes and relay rooms.

Stations are visited, each gets a short introductory history, and there are visits to the many level crossings along the line, including Woodcroft manually operated gated crossing.

There are views of today’s passenger and freight trains in multiple locations, along with archive footage from St James Deeping, Helpston and Tallington boxes.

Bonus features include Eastfield ’box, the last mechanical signalbox on the ECML, and a look at the Nene Valley Railway signalling and trains.

Narration is comprehensive, but not boring, with a bit of humour now and then, and the only criticism is the narrator uses the phrase train spotters instead of rail enthusiasts! Recommended. CB

It certainly reveals the significant changes that have taken place in services, rolling stock and infrastructure during this period in a city which has changed dramatically.

Included are many unusual views of the GM network, which covers an area of 493sq miles with 142 miles of heavy rail network and 96 stations. The Metrolink system adds an extra 57 miles and another 124 stops – thus providing tremendous variety for the rail photographer.

The book covers the heavy rail network from north to south and provides a general overview of the Metrolink.

Captions are detailed and informative. Perhaps a map of the GM network would have been helpful?

Nonetheless this is a very useful publication with which to explore this fascinating rail system. Recommended.    RSS

Read more News and Features in the March 2020 issue of The Railway Magazine –on sale now!