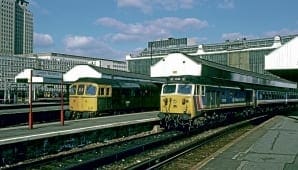 Behind every railway event there is a PR team praying nothing goes wrong on the big day. With the recent 30th anniversary celebration of British Rail’s most successful sector, Network SouthEast, Dennis Lovett explains the lead up to that launch back in 1986.

Network SouthEast anniversary: Tales from the launchpad
High-profile launch events for the media, opinion formers and customers have long been part of the railway scene.

Indeed, they can be traced back to the opening of the Stockton & Darlington Railway and the Liverpool & Manchester Railway, although in the latter case it was unfortunate that one of the opinion formers, the MP for Liverpool, William Huskisson, was killed during the celebrations by a passing train.

While today’s high-profile events occur regularly and are reported on the pages of The Railway Magazine, June 10, 1986 revealed a new railway for London in the form of Network SouthEast, its striking red, white & blue livery and the rolling out of red lamp posts, seating, waste bins and digital station clocks becoming legendary almost overnight.

Read more in July’s edition of The RM