LONDON Luton Airport has announced a revised scheme to connect the airport with Luton Parkway station via a Mass Passenger Transit (MPT) system. 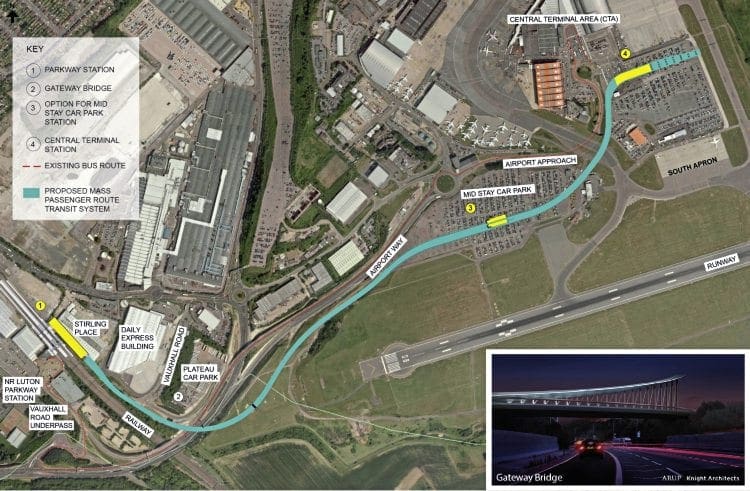 The news comes as the airport recorded a year-on-year passenger growth for October of more than 18% to 1.3million.

The MPT idea is being developed to encourage passengers to travel to and from the airport via a more sustainable and efficient means of transport. It will be a fully automated and driverless system, about 1.3 miles (2.2km) in length, and would operate 24 hours each day, with journeys taking around five minutes.

The projected route (see map) lies mostly on land within the Luton Borough Council area, with a small section controlled by Central Bedfordshire Council. A planning application will be submitted at the end of January 2017 and, if granted, construction of the £200million scheme could get underway in the autumn for completion in 2021.

A MPT terminal would be built alongside Parkway station at Stirling Place, from where the two-track route would run on a mixture of embankments and shallow cuttings to the airport.

In a change from previous schemes, the airport stop will not be in the terminal building but underground, a short walk away.

A linking concourse and passenger overbridge are required across the Network Rail tracks at Luton Airport Parkway to connect the National Rail and MPT stations.

The four-year construction timetable would also include building a new tunnel under the airport’s operational taxiway; constructing new tunnels and a station within the restricted Central Terminal area and approach; digging a ‘trough’
for the MPT through the
Mid-Stay carpark; and designing a ‘Gateway Bridge’ to cross the A1081 Airport Way.