July/August 1944: The Failure of Bricklayers Arms as a passenger station – I, by Canon Reginald B. Fellows. 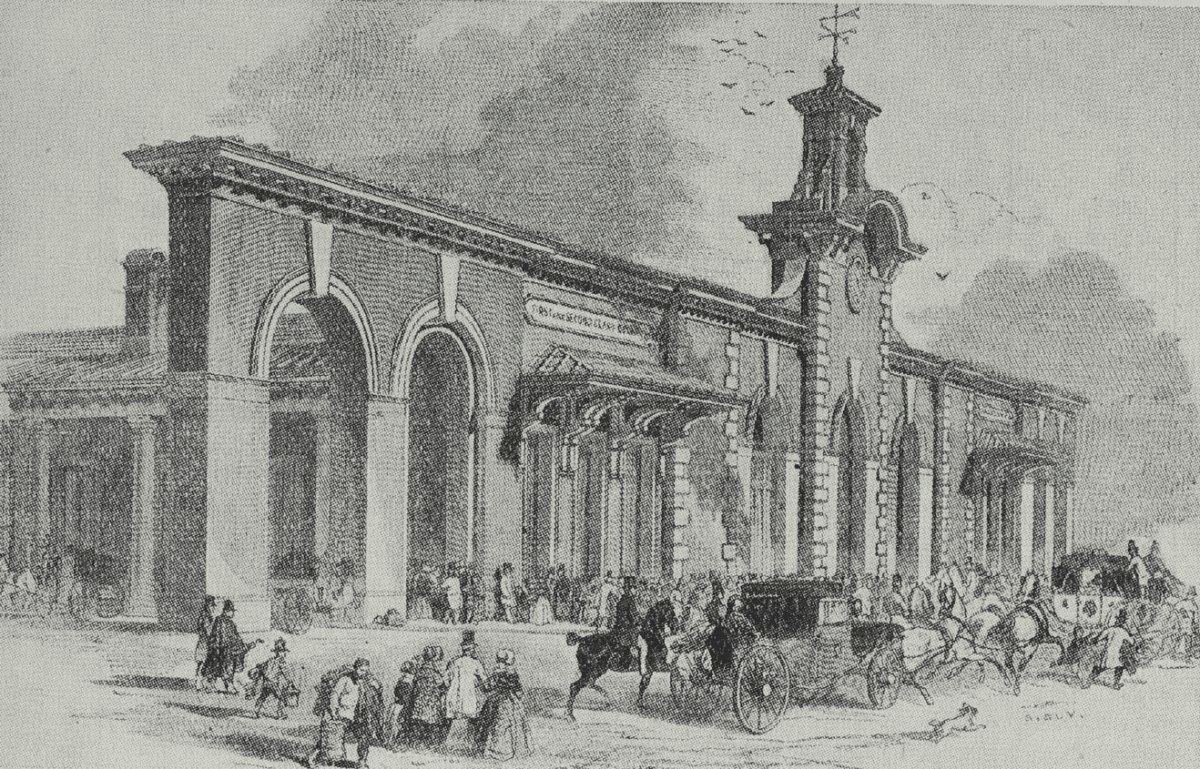 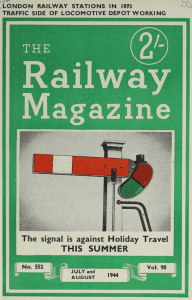 “THE Illustrated Guide to the London and Dover Railway,” published in the summer of 1844 “ By authority of the Directors of the South Eastern Railway Company, ” gave two reasons for the construction of the Bricklayers Arms branch and station. The first was that public accommodation rendered the station necessary. A station more accessible to the West End of London than London Bridge was required. The second reason given was the limited capacity of London Bridge terminus, which had no adequate provision for dealing with the increasing traffic in goods, agricultural produce, and cattle, that had come to the company.

There was a third reason, not mentioned in the official Guide, namely, to avoid the excessive charge levied by the London & Greenwich Railway Company for the use of its 1 3/4 mile line between Corbett’s Lane junction and London Bridge Station, amounting to the maximum Parliamentary toll of 4 1/2d. a passenger. By using the new line to Bricklayers Arms neither the South Eastern Company’s trains nor those of the Croydon Company would have occasion to use the Greenwich line to get to their new terminus. The Croydon Company had a long—standing grievance against the Greenwich Company for the heavy toll charged for the use of the line to London Bridge. The Greenwich Company refused’ to give easier terms, though urged by the Board of Trade to do so in the interests of the public. 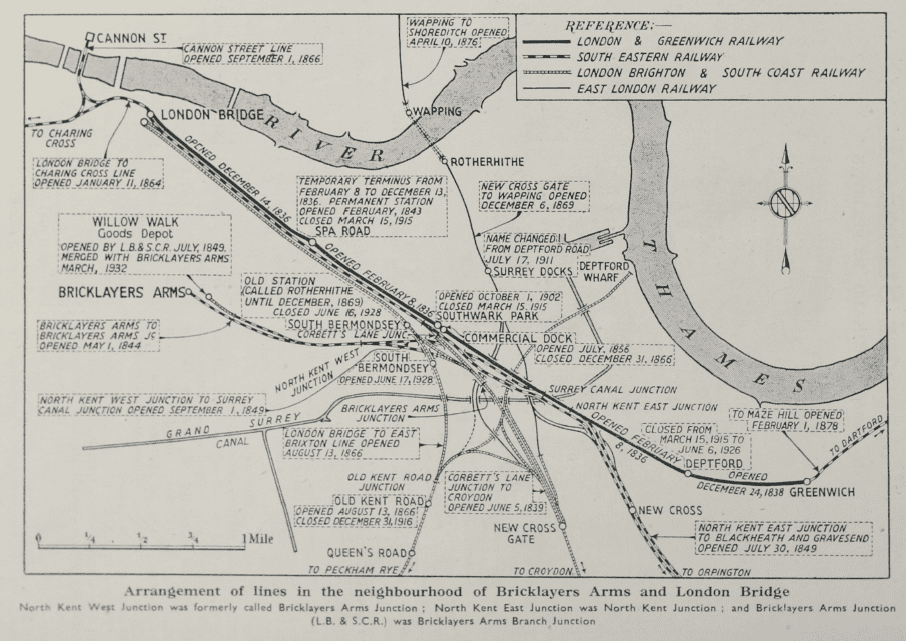 The Bricklayers Arms branch was opened for passenger traffic on May 1, 1844. The station, the architect for which was Mr. Lewis Cubitt, is described at length in the official Guide, and an illustration of the exterior, similar to the one reproduced at the head of this article, is given. Besides adequate booking facilities and waiting rooms for first, second, and third class passengers, there was a large goods depot, and a considerable area with pens “for sheep and cattle with a separate exit to the High Kent Road (sic) for their departure to the markets of the metropolis.” 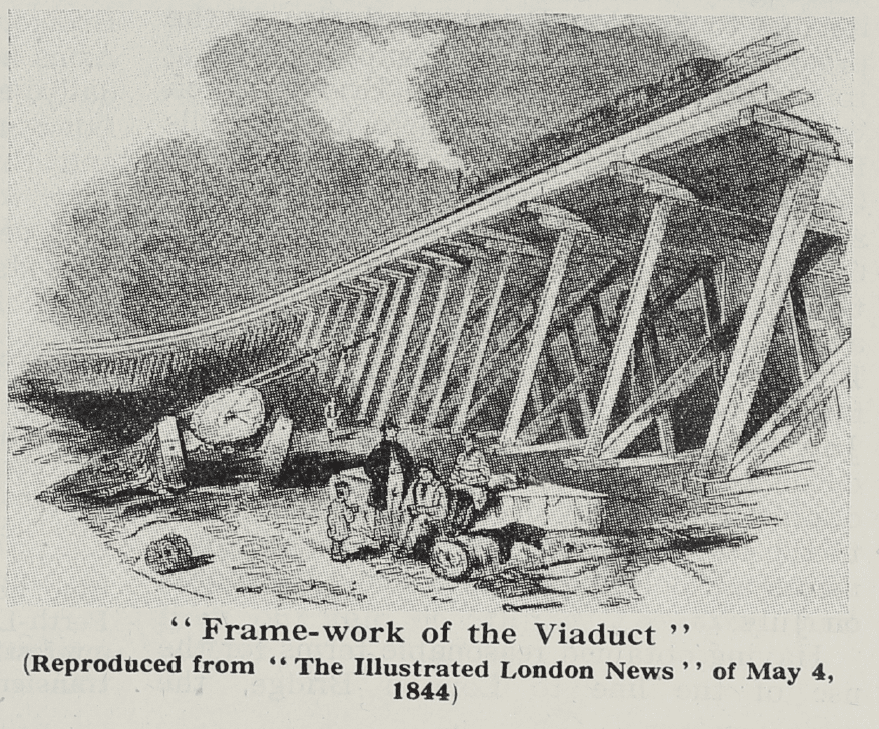 Of locomotive interest was “an engine house for spare engines which was about 60 ft. X 51 ft.; on the outside of this was an immense turntable sufficient to turn the engine and tender at once.” Attention is called to this because it was usually necessary in those days to uncouple the tender from the engine and turn each separately.

Other features of the line worth noting were Roll’s Bridge, a timber structure built in the American manner, and a wooden viaduct about a mile long to join the Croydon line at New Cross embankment. “This viaduct——the work of Messrs. Grissel & Peto-——is a wonder of its kind. With great lightness of appearance, and marvellous economy of materials, it possesses prodigious strength, at a tithe of the cost of an embankment or a brickwork arcade, and may safely vie with the most expensive arrangements, in durability and aptitude to sustain the action of a vast railway traffic.” (Official Guide). It may be added that an embankment replaced the wooden piling in the early ’fifties.

Before the opening, two‘ advertisements appeared in The Times of April 27, 1844, one relating to the Croydon ‘Company and the other to the London and Dover Railway.

The Greenwich Company became thoroughly alarmed at this loss of tolls over its line to London Bridge, and also at the prospect of the Croydon Company ceasing to run any trains to London Bridge, which would have meant a complete loss of tolls from the Croydon trains. The Greenwich Company therefore made a fresh agreement as to charges, much more favourable to the Croydon Company, which, in consideration thereof, undertook to run as many trains to and from London Bridge as were run to Bricklayers Arms, and to charge the same fare to both stations. This was settled on July 23, and effect was to be given to it at once. Bradshaw of August, 1844, shows the double service and the equalisation of fares to the two London termini ; these arrangements are believed to have come into force on July 25.

This arrangement was unsatisfactory, and the company soon issued another notice that “ on and after November 1 [1844] all the trains will convey passengers to and from London Bridge and Bricklayers Arms stations,” but third class passengers were to use London Bridge only, and carriages and horses only Bricklayers Arms. This arrangement did not answer, and on September 1, 1845, the company reverted to the former system of separate trains from the two terminal stations at different hours. On the same date the company began “pleasure excursions ” on Saturdays and Mondays to and from Bricklayers Arms by ordinary and special excursion trains.

Traffic was not attracted to the station, so a better service was provided at London Bridge, and by May, 1846, Bricklayers Arms had only two up and two down trains daily, each taking over four hours between London and Dover, conveying first, second, and third class passengers. These trains were withdrawn at the end of October of that year and ordinary passenger service in that station ceased for some years.

*See “S.E.R. General Statement of the Position and Projects of the Company” published by the Directors, December 27, 1845