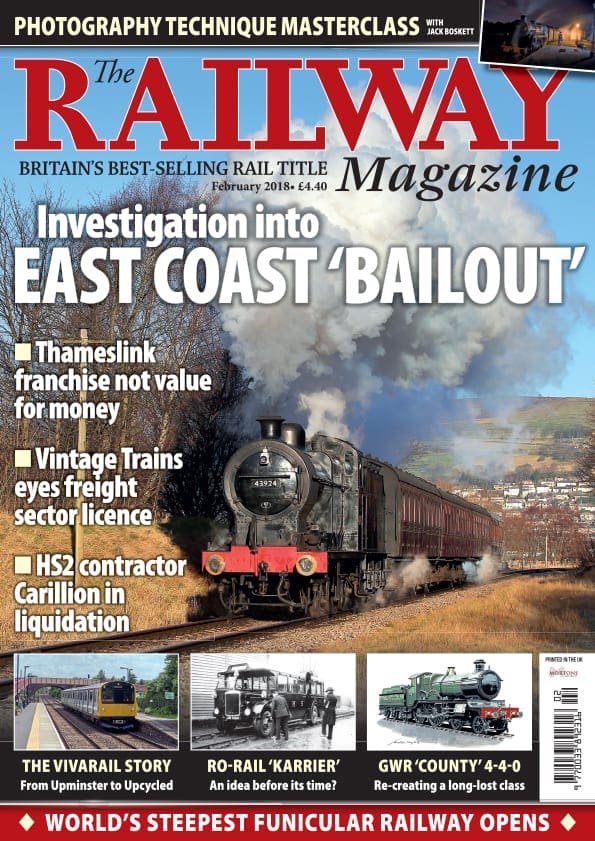 Our regular gallery of the best railway photography.

COVER: Former Midland Railway ‘4F’ 0-6-0 No. 43924 climbs away from Keighley on
January 7 with a KWVR service to Oxenhope. The loco was the first to leave Barry 50 years ago, destined for the Yorkshire branch line, which also marks the 50th anniversary of
re-opening this year. ANDREW BELL

As a new group takes on the project to build a replica GWR ‘County’ 4-4-0, Gary Boyd-Hope explains how they plan to achieve their goal and bring back another long-lost class.

22 Ro-Railers: Ahead of their time?

Vehicles capable of working on both rail and road were tested prior to the Second World War, but didn’t catch on. Alan Dale wonders if the idea was too advanced for the technology of the time.

28 From Ukraine With Love

Risking detention and a possible international incident, Mark Darby visited eastern Europe in 2017 to photograph powerful ex-Soviet diesels. Find out how he and his companions fared.

34 From Shanghai to Shenfield

John Heaton draws together a diverse collection of Practice & Performance logs, embracing the Shanghai Maglev, Class 345s and a recent main line outing with a ‘Deltic’.

With the core tunnels under central London due to open in December, Keith Fender visits Crossrail for an update on how construction of the £14.8billion railway is progressing.

46 From Upminster to Upcycled

The next issue of The RM is on sale March 7 – order your copy now!