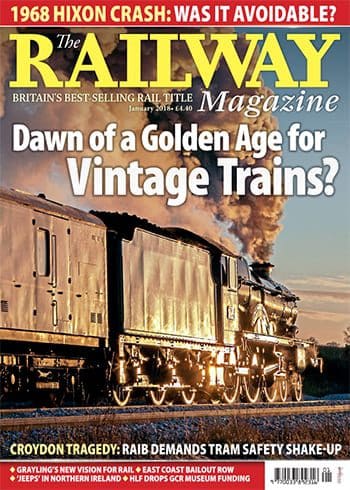 A seasonal gallery of the best railway photography.

Crossword & Where Is It?

Keith Farr looks back at the ‘go-anywhere’ 2-6-4Ts built by the LMS Northern Counties Committee for use in Northern Ireland, which became the last main line steam locomotives in revenue service in the UK.

In the last of his series looking at serious rail accidents from 50 years ago, Fraser Pithie considers the tragic events that led to the devastating level crossing collision at Hixon on the West Coast Main Line in January 1968.

Gareth Evans visits the Bredgar & Wormshill Railway to discover the latest developments at this
2ft-gauge line in Kent, run by a group of friends and open to the public just once a month.

Deep under south London, a narrow gauge railway is essential to the construction of a new extension to London Underground’s Northern Line, as Keith Fender discovers.

Signs of the Times

A pictorial study provided by Steve Ryszka of some of the remarkable railway relics of a bygone era that can be found in many towns and cities around the British Isles.

Thinking about your railway ‘trip of a lifetime’ or just a flying visit to see the fascinating railways of our near neighbours? Our latest rail holiday guide is packed with inspiration for your next trip.

COVER: A new golden era beckons for Tyseley as it bids to become the latest heritage Train Operating Company. On December 9, No. 5043 Earl of Mount Edgcumbe catches the sun as it heads for York with the ‘Christmas White Rose’ tour. ROBERT FALCONER

The Febraury edition of The RM will be on sale Wednesday, February 7 – order your copy now!