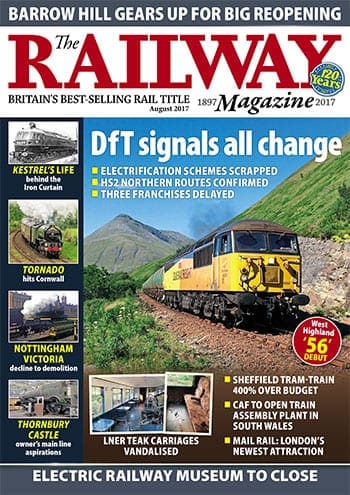 Meetings
Railway society meetings near you – all the details.

Heritage Diary
Details of when Britain’s unique collection of heritage railways and railway museums are open.

The Big Bird That Flew Too Far – Part 2
Robert Humm completes the story of the unique 4,000hp Hawker Siddeley diesel prototype with a fascinating insight into its export behind the Iron Curtain to the Soviet Union and the mystery surrounding its demise.

Electrics, Diesels and Electro-Diesels
John Heaton continues his Caledonian Sleeper experience with a journey from Aberdeen to Edinburgh in the cab of a re-engineered GBRf Class 73/9.

Nottingham Victoria – Part 2
Nottingham waved farewell to its Great Central station in September 1967. Robin Stewart-Smith looks back at the final two decades of its life, and the steady decline in status from GCR showpiece to unstaffed halt.

Restoring Thornbury Castle
Gary Boyd-Hope talks to Jonathan Jones-Pratt about his plans for the unrestored BR-built ‘Castle’ and his other locomotive, Kinlet Hall, which is currently being restored at Tyseley.

Rebirth of the Corris Railway
In the latest of The RM’s studies of ‘Lazarus Lines’, Cliff Thomas visits a famous Welsh narrow gauge railway, that first saw use by steam in 1878 and is being resurrected almost seven decades after it was closed by British Railways.

Tornado hits Cornwall
In a Practice & Performance special, Keith Farr rides behind A1 No. 60163 Tornado on an epic 305-mile journey from London to Penzance that also marked the first visit of the class to Cornwall.

On the cover
COVER: Fuel oil traffic returned to the West Highland Line in July on a trial basis, hauled by Colas
Class 56s – the first time the Type 5s have been seen on the route. No. 56302 passes County March summit with the southbound empties to Grangemouth on July 24. JAMIE McEWEN