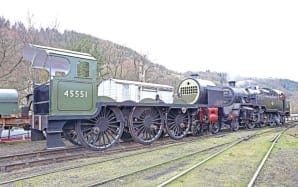 THE now unmistakable outline of the new Fowler 4-6-0 The Unknown Warrior has returned to Llangollen as the rate of construction accelerates.

First steam move for phoenix ‘Patriot’
‘Patriot’ No. 45551 The Unknown Warrior won’t be able to move itself for a couple of years, so ‘4MT’ No. 80072 – six decades its senior, but 21 years its design junior – was called upon to trip the 4-6-0 from the low loader into Llangollen works on March 24. DAVID WILCOCK
Following the landmark fitting of the bogie frame and wheels, No. 45551 returned from Tyseley Locomotive Works on March 24 and was shunted into the workshop by Standard ‘4MT’ No. 80072, the first time that it has been coupled to a ‘live’ steam locomotive.

Read more in May’s edition of The RM