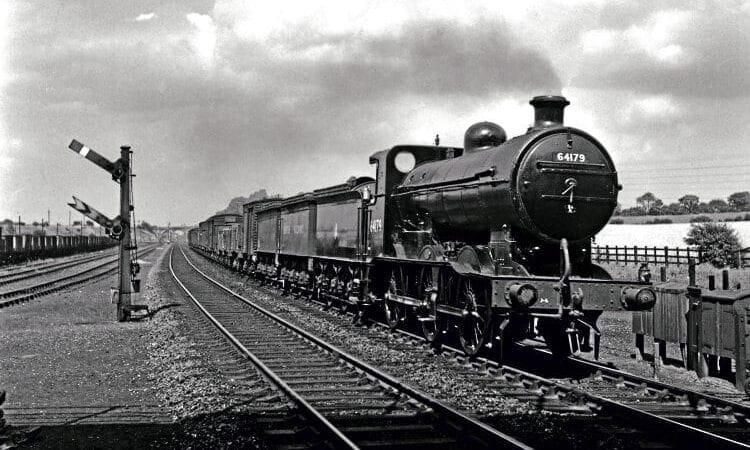 Chris Milner concludes his interview with 100-year-old photographer Ron Buckley, who returned from wartime military service to a railway preparing for Nationalisation.

AFTER leaving England in 1940 and serving with the Worcestershire Regiment, Ron returned home after demobilisation in 1945 after four-and-a-half years away – and to a very different railway.

The ‘Big Four’ had worked as one railway under the Railway Executive, and with Luftwaffe action destroying or damaging 482 locos, 13,314 carriages and 16,132 wagons, the railways were badly run down. It was the Transport Act of 1947 which aimed to bring stability and investment under the guise of British Railways leading to Nationalisation of the railways on January 1, 1948.

Rejoining his former employer – the LMS – late in 1945, Ron worked at King’s Heath station dealing with goods traffic under stationmaster J J Ashwell; he had a friendship with local butchers who used to give him quite a bit of meat at a weekend.

This meat, along with vegetables that were grown in a nearby allotment, were cooked on a single gas ring in the station building, and served to staff. “It was superb,” Ron commented.

King’s Heath closed to passenger traffic in 1941 as a result of the war, and although it never reopened the station continued to deal with goods traffic until the early 1960s.

Film was still difficult to obtain just after the war – even in 1946 and 1947 – so Ron’s output of photographs was reduced.

After two more years in the south Birmingham suburb, Ron moved to the divisional managers’ offices at Derby in 1948, where he was interviewed by former Lancashire & Yorkshire Premium apprentice and BR locomotive engineer E S Cox.

Working in close proximity to Cox, Ron was often invited by his superior, or the locomotive works manager, into the workshops where, from 1951, BR was building the 130 locos of an order for 171 Class 5 4-6-0s.

Because of Ron’s visits with senior management, he became well known to shop floor staff, often left to wander in on his own to see what was being built, taking a few photos at the same time.

Ron’s period at Derby was at the time when the Fell diesel, No. 10100, was being constructed, and he occasionally ventured out to see its initial workings, a picture of it being published in the April 1952 Railway Magazine.

Ron then met a lady called Joyce, who was the daughter of a driver at the former LNER Langwith Junction shed. They married in 1948 (it is their platinum wedding anniversary this year) after Ron got a promotion, and bought a two-bed semi-detached house in Shropshire Avenue, Chaddesden, for £1,425.

“I had £91,” said Ron. “Joyce had £9 and this was the down payment on the house. It should have been £1,450 but we knocked them down,” he chuckled. Joyce added: “They were nice houses with lovely gardens. No one had a car at the time, but today, there are cars everywhere in that street and even a caravan parked in front of our old bay window!”

Like many railway photographers at the time, Ron used to develop his own black and white films and also print the negatives. Every Tuesday, the family bathroom would be turned over to be a makeshift darkroom with the printing beginning at 7pm, just after dinner.

He’d tie the bathroom up for long periods of time, thinking nothing of spending three or more hours with the acrid chemical smell of developer and fixer – at which point Joyce nods in agreement and rolls her eyes: “On one occasion he set the bathroom on fire!”

A subsequent promotion saw Ron move to the Express Passenger Office, where he monitored all the Class 1 trains from St Pancras to Carlisle, while a colleague did the same on Derby to Bristol workings.

“Promotion was made easy, you just had to outwit three or four other candidates,” he quipped.

Ron also got involved with the Derby Railway Society, and became treasurer. “The society was made up mainly of apprentices from the works, but it never really took off.

“As soon as the apprentices had completed their time, they left the railway for other businesses in the area,” explained Ron.

“We did trips every year by rail, around three was normal, and went to York, Doncaster, Goole. We tried to get to Hull, but that wasn’t easy from Derby. Eventually, the society folded.”

It was during his time at Derby that Ron first met Henry Casserley, who was visiting the shed and Works, and he formed a friendship with the prolific railway photographer, often embarking on photographic trips together.

“I once had to share a bed with him,” he roared. “It would have been in 1952 when BR were closing Newcastle Emlyn. We went to Cardigan on the train, but there were no trains to Emlyn, so we had to take a taxi, only to find the hotels were pretty full up due to the closure of the railway. We were offered a room with a double bed!”

During the 1950s, Ron was heavily involved with timetabling – a task he enjoyed immensely, plotting movements of additional workings on the massive train graphs.

On occasions when diversions were being organised, because of planned work, Ron was required to go to meetings during the week – Sheffield, Millers Dale and elsewhere – and always took his camera when on company business.

Further trips to Scotland were undertaken by Ron in 1946, 1950 and 1959, observing the many changes that had taken place since his pre-war visits. He also took Joyce to Scotland on two occasions for what might euphemistically be called a railway holiday!

In the 1960s, Ron was promoted again, this time with a job back in Birmingham, which he describes as a mixed blessing. “Before I knew what was happening, I was employed on ‘Dr Beeching’ work, closing lines and stations down. I had to work on as many as a dozen closures at a time, and Euston always wanted the information yesterday. After that I just played out time till my retirement.”

Having taken around 7,000 images – Ron did take diesel and electric pictures, and in colour too, but scans of the negatives were lost from a computer, somehow – he admits his favourite locos were the LMS ‘Compounds’ or any Highland Railway loco, many of which had been built by Hawthorn Leslie.

It was in the early-1950s that Ron’s first pictures appeared in The Railway Magazine, and for a few years he had several images published. “It was a great honour to have a picture published in The RM,” said Ron.

“As a youngster, I’d see Railway Magazine on the bookstall, priced one shilling, but I only got sixpence pocket money a week, and couldn’t afford it at the time.”.

Taking retirement in 1977, after a 43-year career on the railways, Ron spent much of his time honing his carpentry skills. His chief success, he says proudly, was making a grandfather clock from a £30 kit. “There were many dodgy moments, but it still stands in our hallway, keeping perfect time after 37 years so far.”

With age catching up on Ron, and being less mobile, he finally gave up taking pictures of trains in 2014, aged 97 – yet three years earlier, had often still travelled to places by train, and took time to visit Lichfield Trent Valley station, close to his Staffordshire home.

While the trusty Rolleiflex may be a distant memory, Ron does have a small Panasonic digital camera to take the occasional family snap, and has indeed moved with the times into the digital age.

Just how Ron’s pictures, which were lodged with a small photo library, were discovered and came to be published is another interesting story.

Railway author Brian Dickson, who is also a volunteer at the Chinnor & Princes Risborough Railway, had been researching pictures for a railway book on Scotland when he stumbled over Ron’s negatives. Realising they depicted many rare and unusual pre-Grouping locos, he felt there was enough material for a book, which led to the publication in 2015 of the first volume, featuring Scotland,
by The History Press.

As Brian trawled through Ron’s other material, he realised it was like an ‘Aladdin’s Cave’, full of top-quality unpublished railway photographs, and these have spurned four other volumes – North Eastern, Great Western, Southern, and published at the end of March, the album covering the East Midlands and East Anglia.

There is at least one other book in the pipeline too, and given the quality of Ron’s wonderful images, that should be worth waiting for.

It has been an absolute pleasure to meet Ron Buckley, to listen and record some of his wonderful tales, perfectly recollected, from a very full, active and colourful 100 years. ■

Read more News and Features at https://www.therailwayhub.co.uk/ and also in the latest issue of The Railway Magazine – on sale now!