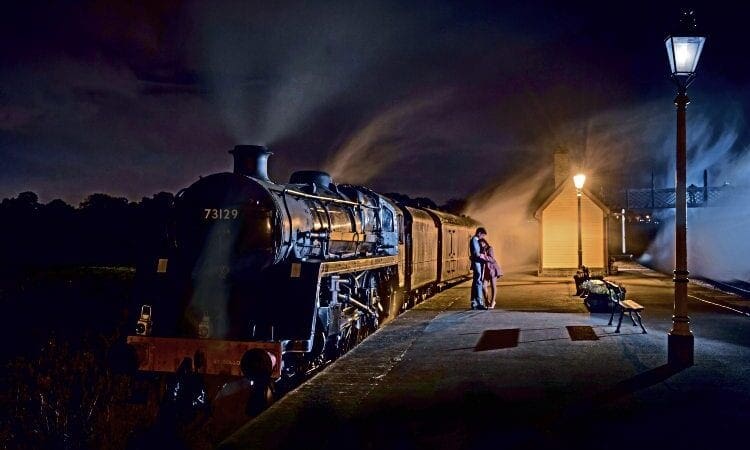 The editor meets professional and commercial railway photography Jack Boskett, whose portfolio includes The Royal Family and celebrities. He explains the techniques used to create thought-provoking and dramatic railway photographs.

Jack Basket (pictured below) had his first picture published in The Railway Magazine in November 2006, aged 16, but before that he won his first photographic competition in the under 18 category at just seven with a photograph taken on the Gloucestershire Warwickshire Steam Railway.

Jack is self-taught and developed his skills and railway photography knowledge throughout the years without the help of college or university courses, instead being guided by father Ian from an early age, to learn the basics on how a film camera worked. Jack says he now teaches his dad how to use a digital camera!

In 2010, Jack started a photography business in Tewkesbury, Gloucestershire that now specialises in commercial, wedding and PR, building up a wide client base. However, his first love is railway photography, and as well as his own creative images, he works for the Rail Delivery Group and Great Western Railway on a regular basis.

One of the greatest accolades, together with the acceptance of a very high quality of his work, is that Jack has worked among royalty as the sole photographer at various engagements, capturing images of HM Queen and the Duke of Edinburgh, as well as other members of the Royal Family.

Behind the lens, Jack uses Nikon camera bodies, including a D5, D850 and D4s, along with a host of lenses to suit each job.

He has a following on social media and attends various photographic charters which are specifically put on for both amateur and professional photographers at railways around the country. However, Jack has a creative eye and encourages himself to think outside the box. He often strays from the gallery of photographers to look for the alternative view and capture something unique to his style of photography.

Jack also uses his imagination to re-create bygone scenes of the 1950s and 1960s when a dull day is perfect for this style of railway photography as it works hand in hand with black and white imagery. It’s not always about the locomotive either, occasionally it’s the small details that stand out.

One thing Jack’s images do not rely on is the wizardry of Adobe Photoshop. He says he hasn’t the time to spend hours on editing one image, so the priority is to take the images correctly on the day, taking account of the composition and camera settings.

Every image is shot using manual settings, in raw format for ultimate quality, and post-processing consists of minor adjustments to levels contrast and highlights.

Each photograph is thought out beforehand. It’s not as simple as turning up and pressing the shutter. Jack recognises if something doesn’t look correct, and works to adjust the scene or his position to ensure it looks authentic.

Jack tours the country talking to railway photography societies and camera clubs about his work and has recently embarked on a one-man show called ‘From Railways to Royalty’, presenting his work on a large screen to a wider audience.

Compare Jack’s approach to that of Bishop Eric Treacy nearly 70 years ago. Click here to take a look.