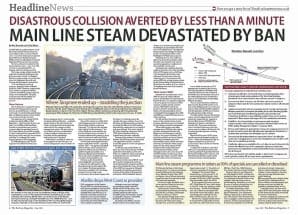 WEST Coast Railway Company (WCRC) has been found guilty for its role in last year’s near catastrophic signal passed at danger incident at Wootton Basset.

£200k fine as West Coast pleads guilty to safety breaches
How we first reported the now infamous SPAD at Wooton Bassett Junction in the May 2015 issue.
The charter train firm has been hit by a £200,000 fine and ordered to pay £64,000 in costs.

The driver of the locomotive, Melvyn Cox, has received a four-month custodial sentence, which is suspended for 18 months.

Read more in July’s edition of The RM