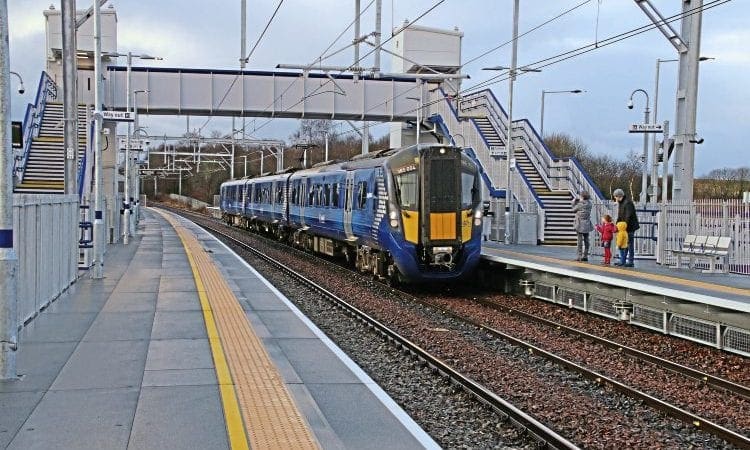 TWO new stations opened for the start of the winter 2019/20 timetable, with a new platform at a third.

Robroyston, between Stepps and Springburn on the former Caledonian Railway line to Cumbernauld, has been built close to the site of its predecessor, which closed on June 11, 1956.

It serves a new development of 1,600 homes in Robroyston and Millerston, and has a half-hourly Glasgow to Edinburgh via Cumbernauld service on weekdays, operated by Class 385 EMUs.

It is the 60th station in the Glasgow area and cost £14million to construct.

On December 16, Warrington West station was formally opened a day after services began calling there.

The £20.5m station has been funded by Warrington Borough Council, the DfT, developer contributions and Cheshire and Warrington Local Enterprise Partnership.

It is initially served by four trains an hour, one limited stop and one stopper in each direction heading east to Warrington Central, Manchester and Manchester Airport or west to Liverpool.

The project is part of the Chapelford development and was delivered by Balfour Beatty, with work starting in January 2018.

The staffed station features a building that echoes local history, with a design based on an aircraft hangar.

As a new build it is fully accessible, has drop-off and taxis space, and a large pay and display car park with CCTV and lighting.

The station also offers a good interchange with current and future bus services, and is less than 1km to the east of Sankey for Penketh station, which it has effectively replaced.

However, for the time being Sankey for Penketh now sees just two trains a day in each direction timed for commuting to either Liverpool or Manchester. Some local passengers have been unhappy with the change, but it was not possible to add additional stops without affecting performance.

In Scotland, a new Down platform at Dunbar opened, along with a new footbridge and lifts from the Up side station buildings.

By constructing a second platform, it will eliminate the need for both Up and Down trains to use the one platform, be long enough to accommodate the new 10-car ‘Azuma’ trains, and also create capacity for additional future services.

The project has cost £13m and was funded by Transport Scotland.

Read more News and Features in the January 2020 issue of The Railway Magazine –on sale now!