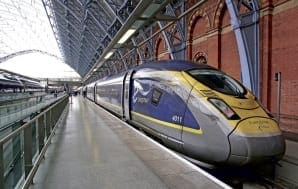 EUROSTAR has announced it plans to start services from London to Amsterdam from December 2017 using its new Class 374 ‘Velaro e320’ trains, which are being built by Siemens, at Krefeld, in Germany.

More routes for Eurostar
New Class 374 train led by 374 011 after arrival from Paris at St Pancras on April 11. KEITH FENDER
The announcement was made at an event in late April to promote its community and environmental involvement.