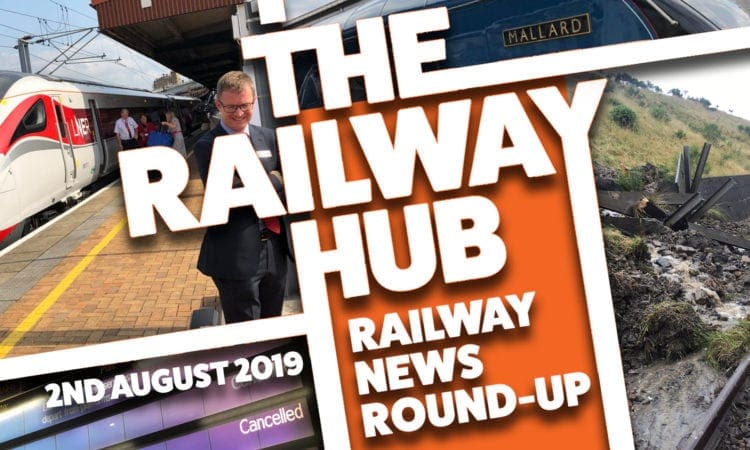 We start this week’s railway round-up with the ongoing tragedy in Whaley Bridge, plus we headed to York to see the launch of the new Azuma trains!

A Royal Air Force Chinook has been drafted into a Derbyshire town in efforts to stop a reservoir collapsing after it was “badly” damaged during heavy rain.

Hundreds of Whaley Bridge residents have spent the night away from their homes due to “an unprecedented, fast-moving, emergency situation” caused by heavy downpours.

Rail passengers on the Liverpool Lime Street / Nottingham / Norwich line had their journeys disrupted as a result of the dam threatening to collapse.

Before the Azuma arrived to crowds of spectators and the media, LNER icon, the Mallard, was greeted at the platform in a rare outing. The Azuma sees LNER introduce new trains into its York and Edinburgh services for the first time in 30 years.

Members of the Rail, Maritime and Transport union at CrossCountry Trains will ban overtime and rest day working for five days from midnight on Thursday. The union said there had been a “fundamental breakdown” in industrial relations at the Arriva-owned company.

CrossCountry said services will be “significantly reduced” on Sunday because of the industrial action and urged passengers to check before they travel.

Passengers in Cheshire, the North West and Cumbria should check before they travel as landslips and flooding caused by heavy rain are affecting some journeys.

The Great North Rail Project have said that around 150 tonnes material slipped onto the tracks at the landslip on the Settle-Carlisle line.

Rail disruption due to damage caused by heatwave continues for fifth day, with engineers “working around the clock”.

Thameslink is being forced to run a reduced service until overhead electric wires are fixed in the West Hampstead area of north-west London.

Network Rail said its engineers have been “working around the clock” since the wires were damaged by scorching temperatures on Thursday.

The government-owned company discovered over the weekend that the scope of the work was “larger than previously anticipated” and involves replacing around 2km (1.2 miles) of equipment.

Merseyrail was the UK’s most punctual passenger train operator in 2018/19 with an average of 95.51% of trains running on time – well above the national average of 86.3%.

Overall national punctuality during March was steady at 89%, but Merseyrail topped the charts with an impressive 98.1%.