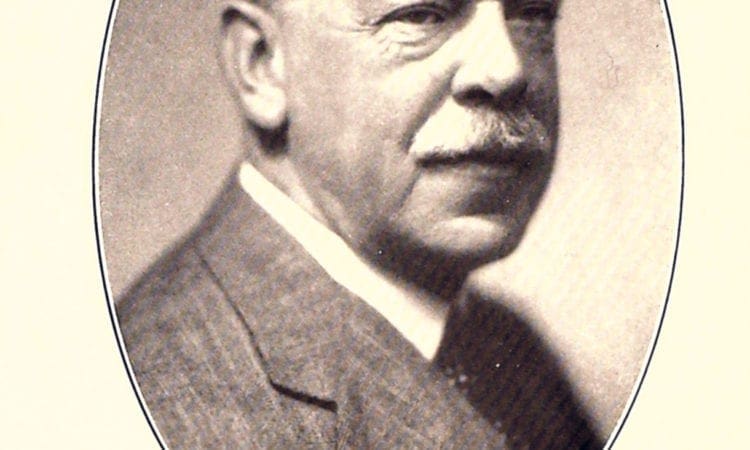 The death of Sir Nigel Gresley at Hertford on April 5, deprives the railway mechanical engineering profession of one of its most distinguished personalities, and one whose career has no parallel in the locomotive history of this country.

For nearly 30 years he held the chief executive position on the mechanical engineering side of an important railway, first as Locomotive Engineer of the former Great Northern Railway, to which post he was appointed at the unusually early age of 35, and, secondly, as Chief Mechanical Engineer of the London & North Eastern Railway.

Herbert Nigel Gresley, son of the late the Rev. Nigel Gresley, Rector of Netherseale, was born on June 19, 1876, and went to school at Marlborough. He began his railway career at the Crewe works of the L.N.W.R. where he served his apprenticeship under F.W. Webb.

He was subsequently a pupil of Sir John Aspinall at Horwich, Lancashire & Yorkshire Railway, and after varied experience achieved the position in 1902 of Assistant Superintendent of the Carriage & Wagon Department

In 1905 he was appointed Carriage & Wagon Superintendent of the Great Northern Railway, which appointment he held until October, 1911, when he succeeded H. A. Ivatt as Locomotive Engineer at Doncaster.

On January 1, 1923, he became Chief Mechanical Engineer of the newly-formed London & North Eastern Railway, the only technical officer whose authority covered the the whole railway, as the L.N.E.R. adopted the divisional system, with chief technical officers for each division.

Gresley’s long association with locomotive and rolling stock design, and the responsible positions he held in the course of his career provided him with ‘ample scope for the exercise of his outstanding abilities, among which was enterprise combined with energy and courage that enabled him to tackle with success the many problems that must always confront the chief mechanical engineer of a great British railway.

Although he was conservative in the best sense, he had the breadth of mind to consider new ideas put to him both inside and outside the railway, and to have those of them which held promise investigated and often tested in practice. Thus, he never rested on his laurels, but was always seeking and finding improvements.

The death of Sir Nigel Gresley on April 5, 1941 deprived the railway mechanical engineering profession of one of its most distinguished personalities

He had inventive genius as well as administrative ability, and his strong advocacy of three-cylinder single-expansion propulsion was accompanied by an important factor in its success on the L.N.E.R. in the form of his own design of conjugated valve motion. This, he contended, was preferable on grounds of economy of weight and maintenance to providing each cylinder with its own individual motion.

Nevertheless, the success of the Gresley gear did not prejudice the trial of other gears, as witness his numerous three-cylinder 4-4-0 locomotives,‘ fitted with poppet valves which continue to give reliable service on the northern sections of the line.

Gresley was a great believer in the principle of the big boiler, including, where possible; a wide firebox and large grate area ; he also gave much attention to the question of comfort and often discussed this and other; kindred matters with the enginemen.

Nothing was too much trouble to him if in the end it might lead to some improvement in the locomotive, and it was this ceaseless activity on his part which led to his promotion of the plan for setting up a stationary locomotive testing plant.

His advocacy of this scheme was strengthened as a result of the tests on his 2-8-2 express locomotive Cock o’the North which, with characteristic enterprise, he sent over on the train ferry to France, where it ran under its own steam to the Vitry testing plant at Paris in 1937. As a result certain features of the new engine were shown to be susceptible of improvement, and the subsequent locomotives of the class were modified accordingly.

But for the war this advocacy would by now be nearing fruition by the completion of the plant which was in course of construction jointly by the L.N.E.R. and the L.M.S.R. Reference must be made, in mentioning major experiments, to locomotive No. 10000, with its Yarrow water-tube boiler carrying a pressure of 450 lb. per sq. in.

This engine, originally constructed in 1929 as a four-cylinder compound with the idea of securing reduced coal consumption, failed to achieve its object and was converted in 1937 to a three-cylinder simple with a normal boiler.

Meantime modifications to the valve setting of the Pacifics, indicated by comparative tests with Great Western locomotives, resulted in their giving highly successful and economical service. Gresley’s further development of the Pacific type bore evidence, in their internal streamlining, of his observation of French locomotive practice.

In the meantime the call had come for higher speeds, and Gresley, who, although impressed by his journeys on the diesel FlyingHamburger in Germany, was a strong advocate of steam for his country, had responded with trial runs which showed that his earlier pacific were capable of putting up performances hitherto regarded as beyond the normal capacity of standard locomotives.

The faster travel required by the Operating Department to attract additional traffic demanded sustained speed in so high a range as to justify external streamlining, and the introduction of the Silver Jubilee between King’s Cross and Newcastle in 1935 led to the inception not only of other streamlined steam trains on ‘3‘;g. the L.N.E.R. but also the Coronation Scot on the L.M.S.R.

How successful were the modifications Gresley made to his Pacific design to cope with the requirements of high-speed is shown by the fact that one of his streamlined Pacifics, N0. 4468, Mallard, attained on test a momentary maximum speed of 126 m.p.h., the highest reached in Great Britain, and probably a world record for steam traction…

…Want to know more? Listen to the In Training podcast where you can join hosts, Ben and Shannon as they discuss the interesting life of the great Sir Nigel Gresley. Episode two: ‘Who was Sir Nigel Gresley?’ can be downloaded here:

Listen to episode one: ‘What is a train?’ here:

“Railways, we use them to commute to work and go on holiday, they sprawl through our countryside and cut through our cities. But what are they? And where did they come from? And what do you do when you work for a railway magazine but know nothing about trains?

“This is the podcast where we aim to answer all those questions and more. Join your hosts, Ben and Shannon, as each episode we delve into a different aspect of trains and the network until we’re all fully fledged railway buffs. Welcome to the In Training Podcast!”